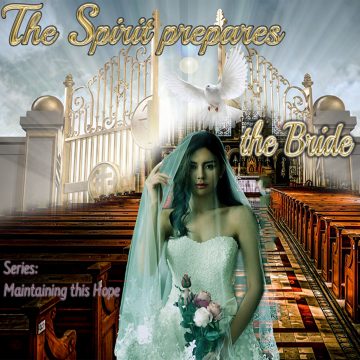 Message –  The Spirit prepares the Bride

The Spirit prepares the Bride

Every year God seems to give us a theme

This year even more so. Not because there was so much material, which there is, but because I felt more compelled to  carry-on with this topic.

As you may remember, I was earnestly seeking the Lord last year about this time, asking Him how I as a Shepherd of the sheep – how ANY spiritual leader or even parent for that matter – stirs up a sustainable…maintainable earnestness in our walk.

How to keep from getting side stepped in our devotion – being drawn off into the mundane by the trappings of life and this world we live in.

God’s answer to me was in the partial quote of a verse “Those who maintain this hope in themselves, purify themselves even as He is pure.”

I have to admit that at the time, I couldn’t remember what that verse was referring to. What hope?

I assumed it was our Great Hope of Christ being formed in us, but I was wrong – it was the return of Christ, which of course, DOES have implications for Christ’s formation in us, but it is more than that. It is not a simple theological truth. It isn’t escapism…it is a cry of the heart of the body of Christ who longs to be with Him – not just to escape the wickedness and drudgery of this fallen world.

So we have explored this since before January of this year and have found that it is a theological backbone of the entire gospel message. Final and eternal union with God at the return of Christ for His bride.

We’ve discovered marital language used frequently in reference to this so that it has become clear that the entire gospel, just like the entire Old Covenant is predicated upon passion for God.

Think about it… THAT is the first and greatest commandment. That is significant!

In fact it isn’t anything any of us would have thought of.

What it says is quite surprising really.

In fact, we’ve become so over familiar with it that it’s shock value has worn thin.

The first and (according to Jesus Himself) the greatest of all the commandments is to Love the Lord your God with EVERYTHING THAT YOU ARE!

There you have it…passion, from the beginning!

So is it really any wonder that the backbone of the gospel message is eternal union with God?!

As we have advanced through this subject this year, one thing has become clear. Even THIS topic of passionately longing and looking for His return can itself become mundane if all it is…is teaching.

So, as so often happens this time of year, I have been reflecting on all we have covered and I still find it wanting.

I find myself asking under my breath… Lord, how do we get this from the printed page to the heart in a way in which it is believed enough to live it?

And one name comes irresistibly to mind…the Holy Spirit of God!

I was telling Teri about this yesterday and I find myself wishing you could somehow eavesdrop on that conversation because it flowed so naturally and logically.

The conversation that ensued took us from…

So in John 14-16 is where we see Jesus first bringing Him up as the future, full-time person of the Godhead Who will be with each person in the body until Christ’s return and so it seems like a logical place to start.

“(1) Your heart must not be troubled. Believe in God; believe also in Me. (2) In My Father’s house are many dwelling places; if not, I would have told you. I am going away to prepare a place for you. (3) If I go away and prepare a place for you, I will come back and receive you to Myself, so that where I am you may be also. (4) You know the way where I am going.” (5) “Lord,” Thomas said, “we don’t know where You’re going. How can we know the way?” (6) Jesus told him, “I am the way, the truth, and the life. No one comes to the Father except through Me. (7) “If you know Me, you will also know My Father. From now on you do know Him and have seen Him.” (8) “Lord,” said Philip, “show us the Father, and that’s enough for us.” (9) Jesus said to him, “Have I been among you all this time without your knowing Me, Philip? The one who has seen Me has seen the Father. How can you say, ‘Show us the Father’? (10) Don’t you believe that I am in the Father and the Father is in Me? The words I speak to you I do not speak on My own. The Father who lives in Me does His works. (11) Believe Me that I am in the Father and the Father is in Me. Otherwise, believe because of the works themselves. (12) “I assure you: The one who believes in Me will also do the works that I do. And he will do even greater works than these, because I am going to the Father. (13) Whatever you ask in My name, I will do it so that the Father may be glorified in the Son. (14) If you ask Me anything in My name, I will do it. (15) “If you love Me, you will keep My commandments. (16) And I will ask the Father, and He will give you another Counselor to be with you forever. (17) He is the Spirit of truth. The world is unable to receive Him because it doesn’t see Him or know Him. But you do know Him, because He remains with you and will be in you.”