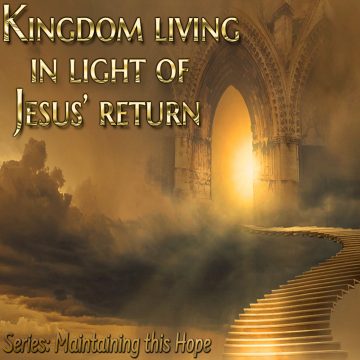 As we were finishing up Paul’s second letter to the church in Thessalonica we read how Paul was setting the record straight regarding the Day or Season of the Lord, when He would advance His purposes in the earth towards the final establishment of His kingdom.

As such we discovered that a proper understanding of the events in the Day of the Lord, especially His return for the church, is deeply rooted in the establishment and advancement of the Kingdom of God.

It is established in the hearts of His people and from that place of heart devotion springs a servant’s heart which expresses itself in acts of proper stewardship to our Lord…the king of the kingdom.

All of these things show up in one way or another in the teaching of Jesus regarding the Gospel of the Kingdom.

The following are little excerpts from Jesus’ teachings which tell us about the Gospel of the kingdom.

This first one is important because it sets the pace for our understanding.

As I’ve told you in times past, there are many in the church today who misunderstand the message Jesus taught because they confuse the fact that Jesus was living under the law and was sent to fulfill all that was spoken of Him in the law with the message He taught. However, Luke does not allow for that misunderstanding.

Luke 16:16,  “The law and the prophets were in force until John; since then, the good news of the kingdom of God has been proclaimed, and everyone is urged to enter it.”

So regardless of the covenant Jesus lived under, He PREACHED the Gospel of the Kingdom – which was the “Good News” the angel’s proclaimed at His birth. Even their words carried the awareness of a universal kingdom in that this Good News would bring great Joy to all people.

So in the ministry of John and in the teachings and ministry of Jesus, the kingdom was always represented as reality which was going to be realized soon. The New Testament writers spoke from the position that is had come at the resurrection of Jesus from the dead!

This past week I saw a post on FB which said, “Heaven has a wall, Hell has open borders” …which is a good segway into the next verse found in…

Why since the days of John? Because that is when the law stopped being in force and the gospel of the Kingdom was commanded to be preached.

Matt. 13:24-20; 36-43, Parable of the sower and the seed “(24)  He presented them with another parable: “The kingdom of heaven is like a person who sowed good seed in his field.  (25)  But while everyone was sleeping, an enemy came and sowed darnel among the wheat and went away.  (26)  When the plants sprouted and produced grain, then the darnel also appeared.  (27)  So the slaves of the landowner came and said to him, ‘Sir, didn’t you sow good seed in your field? Then where did the darnel come from?’  (28)  He said, ‘An enemy has done this!’ So the slaves replied, ‘Do you want us to go and gather it?’  (29)  But he said, ‘No, since in gathering the darnel you may uproot the wheat along with it.  (30)  Let both grow together until the harvest. At harvest time I will tell the reapers, “First collect the darnel and tie it in bundles to be burned, but then gather the wheat into my barn.”’” …(36)  Then he left the crowds and went into the house. And his disciples came to him saying, “Explain to us the parable of the darnel in the field.”  (37)  He answered, “The one who sowed the good seed is the Son of Man.  (38)  The field is the world and the good seed are the people of the kingdom. The poisonous weeds are the people of the evil one,  (39)  and the enemy who sows them is the devil. The harvest is the end of the age, and the reapers are angels.  (40)  As the poisonous weeds are collected and burned with fire, so it will be at the end of the age.  (41)  The Son of Man will send his angels, and they will gather from His kingdom everything that causes sin as well as all lawbreakers.  (42)  They will throw them into the fiery furnace, where there will be weeping and gnashing of teeth.  (43)  Then the righteous will shine like the sun in the kingdom of their Father. The one who has ears had better listen!”

This judgment is the one we heard Keith Green sing about at the beginning of praise this morning. I will be the first to admit that I do not know when this specific judgment will take place or if it is simply a metaphorical judgment representing what will happen at the end of the age. The Bible says we will be judged at the judgment seat of Christ, that those who follow the Lord during the tribulation will be raised and judged as worthy to rule with the rest of God’s children during the millennial age and the rest of the dead will not rise until the end of the millennial reign and those will appear at the great white throne judgment…so it looks like this may be metaphorical in presentation but actual in results. In any case, this passage if read in context with all Jesus had taught that day seems to paint a picture and I agree with Guzik’s assessment of it so I will read from him.

Inasmuch as you did not do it to one of the least of these, you did not do it to Me: The charge against these lost ones does not concern any flagrant violation of a moral code, but their indifferent attitude toward Jesus (and His people). Their indifference seals their doom. Throughout this chapter, the point has been emphasized: the price of indifference is too high to pay. [the parable of the 10 virgins came just before this one]

These excepts from Jesus’ teachers were just those found in Matthew, but their overwhelming message and lessons are clear.

Now today we are going to read through the book of Philippians, taking particular notice of these same thoughts as they show up in Paul’s encouragement to the believers there.

I know we recently went through this book but this time we are looking at it through two very specific lenses. We are looking at everything Paul says to this church through the lens of the Kingdom of God and our being prepared for Christ’s return for us at the rapture.