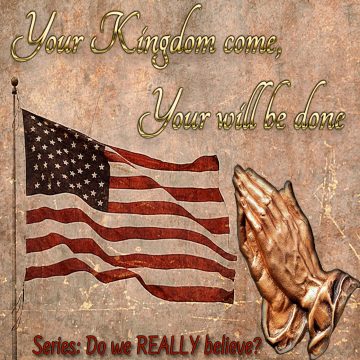 Series: Do we REALLY believe?

MESSAGE: Your Kingdom come, Your will be done

Praying for our nation

Today we were going to return to Philippians and continue where we left off 3 weeks ago, but since this next Wednesday is AFTER the election I thought I’d address any questions you all might have had regarding our teaching on 2Chron. 7 today rather than then.

I “thought” that the lesson went well.

I “thought” that it would put to rest any questions regarding its use WHILE encouraging you with thoughts and prayers that were appropriate.

However, afterwards I could tell there was some unrest – and I got some feedback. But before I address that, I want to open it up and see where others are regarding what we learned?

Do you better understand Solomon’s prayer, the context of the prayer and it’s answer better?

Do you better understand our relationship with government and what should be the focus of our prayers?

What about any heart reactions with the teaching? Did it resonate with you or did you find it restricting and frustrating?

Well in the discussion I had what was shared with me where concerns.

I was asked, “Isn’t there a “general principle” or a “way of God” which can be found in that verse which at least in some way makes it not wrong to pray today?

This person said it made them feel as if now that I have spoken the official standing of this church was essentially to shun others who pray those words.

That it might limit those who might otherwise have felt free to participate in outside Christian gatherings where prayers for our nation were taking place.

They felt there should be room for praying prayers like that since Jesus – even knowing that He was sent to die, even still asked God if there was another way – though He ended His prayer with “Not My will but Yours be done”.

Now it was my feeling that I had effectively said as much when I brought up the Lord’s prayer. We might ask for our desired outcome, but always conclude it with “Your Kingdom come, Your will be done”. But perhaps I didn’t stress that enough to make that part clear.

I also know that to some I come across with a lot of authority and as such I risk turning an otherwise good teaching into a dogmatic and legalistic commandment.

So, I thought maybe after sharing these thoughts, that if anyone else felt a similar way it may loosen their tongue to know they were not entirely alone. So I wanted to ask if others felt the same way or if anyone might have other concerns they would like to voice?

What I was NOT doing Wednesday night

What I was doing Wednesday night…

First of all, I was teaching what the chapters actually said and what they were about.

Key is the promise -> 2Chron. is a promise – not a “maybe” that was a major issue. Unless we have a specific word from God for OUR unique situation we cannot pray with 100% certainty and that alone is a major difference.

We “could” do all the right things and it still not work.

Secondly, I was taking the opportunity to reveal the difference between what the passage says and what it was actually about and placing that alongside the way Christians typically attempt to use the verse.

Thirdly, I was addressing what I view as two really serious problems behind the heart of using the passage regarding political issues.

The first of which is a people who are far too entangled in the affairs of this life. They draw a great majority of their hope and security from national provisions rather than from their Lord.

You’ve heard me address this many times. I believe that the great majority of the problems Christians have with our nation are problems we have greatly contributed to creating ourselves.

One step towards worldly values creates a cascading implosion of compromises which lead to a weak faith which stands more on principles than heart commitment.

So the first reason for the prayer is the need to control political situations to make accomodations for our lack of commitment to the precepts of Christ.

The second of which springs from what I believe I witness most in the body of Christ – which is a group of moral idealists.

I believe most of those who claim to know Christ want a national environment which is not hostile to Christian values while in all reality, they are not fully dedicated to living those values themselves.

In short they want…

During times of national upheaval do you hear your typical fellow Christian talking about the joy and safety they feel being in the kingdom of God and so glad that their hope does not rest in this life…or do you hear them dive into the frey just as angry as the next guy at the chaos and social unrest?

Does the unrest drive them to greater submission to Christ and His words or to political activism?

Are we of this world or are we of another? THAT should be paramount in our hearts, attention and prayers.

I honestly believe that if Christians truly understood their nature and learned from history they would pray for persecution with the caveat of nevertheless, not my will but Yours be done!

One of the most fertile environments for the church to grow in Christ is under persecution NOT peace. Some of the first major, nearly church-wide departures from biblical teachings came during the time of Constantine’s rule in Rome when he legitimized all faiths and sought to unify them largely in Christianity resulting or at very least eventuating in the formation of the Roman Catholic church which nearly drove true Christianity into extinction during the dark to middle ages.

In doing a little homework last night, I ran across a very brief and succinct article which illustrated this later point and I will provide a link to that article on the website, but it was taken from a site called, “Got Questions . Your Questions. Biblical answers.”

I have my own unanswered questions…

Such as, does God honor, even a non-Christian nation whose general way of doing and being is mostly towards Biblical justice?

Podcast Were to Listen: