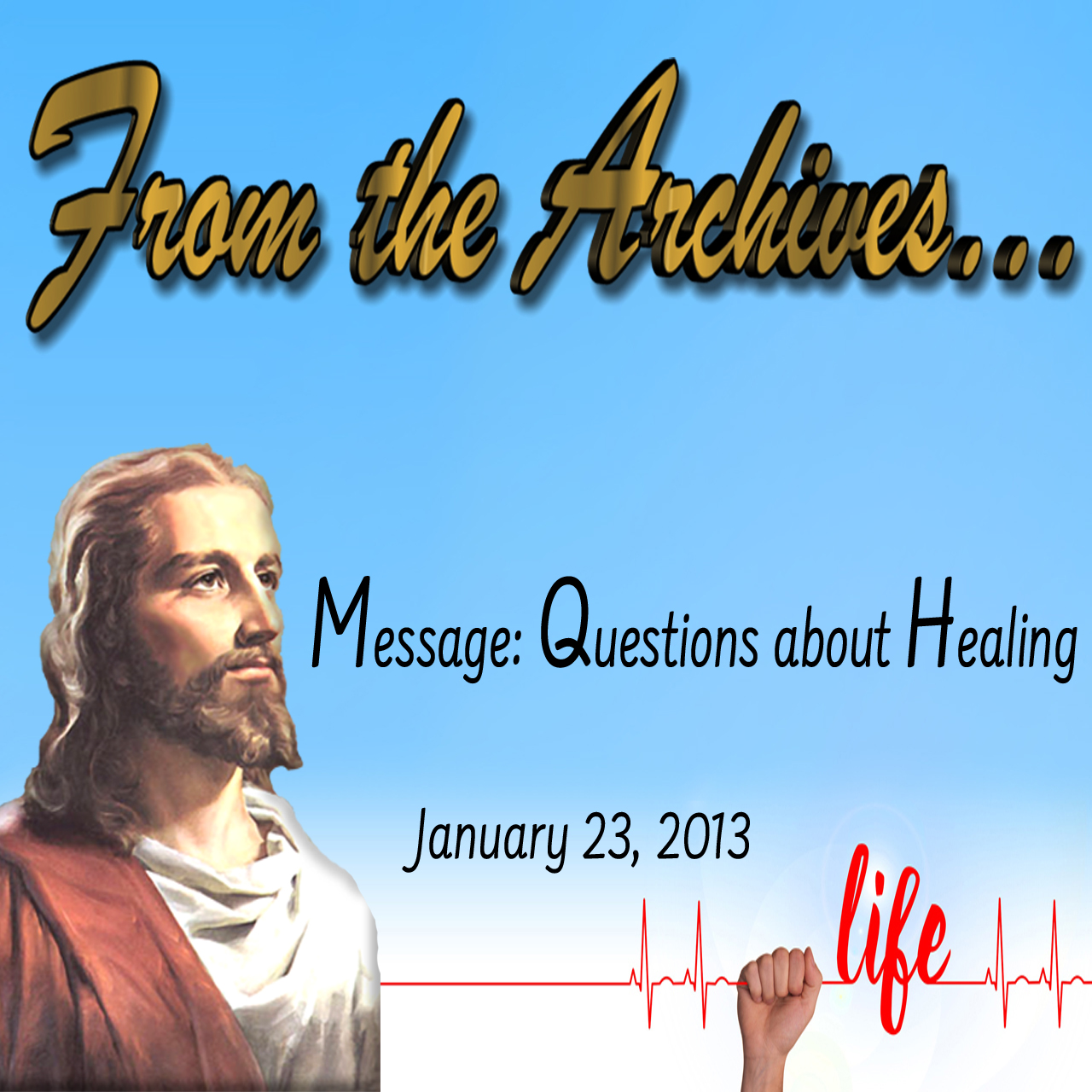 Original Series: …And He Healed them all

To begin with we revisited one of the questions which was addressed on Sunday morning, “Do some things just happen? If parents loose a baby during delivery, is that the fault of the parents or does it sometimes just happen?”

This is a touchy question, but one that deserves the light of scripture to shine upon it and address some very tough issues.

We showed that in scripture we see that either “could be true” and that it depends entirely upon the specifics surrounding an event.

In both David and Jeroboam’s lives, one of their own children died and it was in fact the judgment of God for their sin. Both situations differ slightly but also hold much in common.

While it was not my goal to study these cases thoroughly for more specific answers we only read them to provide an example of this specific question being addressed in scripture. Then we moved to John 9, where a man was born blind and Jesus said that it was not due to his parent’s sin.

So here is an example of tragedy from birth that seemingly just “happened”.

Many attempt to misconstrue the verses to say that God was instrumental in causing the child to be born blind, just so He could turn around and heal him later to get glory.

It is my view that this is a very base view of God and one that seems wholly inconsistent with His revealed nature throughout biblical history.

Anyone who has studied the languages of the Bible know, that English punctuation has been superficially added at intervals which seem most likely to the board of interpreters, but that with few exceptions, there are no hard fast rules which require a comma to appear in place of a period or the other way around.

Grammatically, there are many cases where the meaning of a passage changes entirely if you simply move (or remove) the comma or period.

Then best way to determine where a pauses can and should be distinguished from the end of a sentence is allowing scripture to interpret scripture. Such is the case in John 9:1-5,

As He passed by, He saw a man who had been blind from his birth. So His disciples asked Him, “Rabbi, who sinned–this man or his parents–that he was born blind?” “Neither he nor his parents sinned,” answered Jesus, “but that the works of God should be revealed in him. I must work the works of Him who sent Me while it is day; the night is coming when no one can work. As long as I am in the world, I am the light of the world.” ~ John 9:1-5

In this passage the comma is placed after the word “sinned”, implying that Jesus was not done answering the question about why the man had been born blind. however, in the original language there is absolutely NO reason to place a comma there nor a colon – it would be perfectly reasonable and grammatically true tot he text to place the period in this place, which entirely changes the words of this passage. Done this way it reads,

As He passed by, He saw a man who had been blind from his birth. So His disciples asked Him, “Rabbi, who sinned–this man or his parents–that he was born blind?” “Neither he nor his parents sinned.” answered Jesus, “But that the works of God should be revealed in him, I must work the works of Him who sent Me while it is day; the night is coming when no one can work. As long as I am in the world, I am the light of the world.” ~ John 9:1-5

Given the nature of what Jesus did following this statement, the above punctuation makes far better sense in the context of this dialog and it is more in keeping with all we know of God’s character. What did Jesus do after saying these things? He did the work of His Father! What was the work of His Father? He healed the blind man.

After thus speaking, He spat on the ground, and then, kneading the dust and spittle into clay, He smeared the clay over the man’s eyes and said to him, “Go and wash in the pool of Siloam” –the name means ‘Sent.’ So he went and washed his eyes, and returned able to see.

This is consistent with all he know if the Father! The scriptures say so themselves,

“how God anointed Jesus of Nazareth with the Holy Spirit and with power, who went about doing good and healing allwho were oppressed by the devil, for God was with Him.”  ~ Acts 10:38

What do these verses insinuate?

The rest of our time we spent working through John the 6th chapter to study a case where belief in Christ came quickly upon the heels of a “sign” (miracle) but the faith did not last. Jesus addresses that group with some warnings and encouragement which is still giving light to us today.

We at Living Grace Fellowship encourage you to place your trust in the Jesus Christ, deliberately choosing Him and bowing the knee to Him as your Master and Lord, so as to come to realize Him as your Savior.

You have a special place in God’s family & kingdom. The fact that you exist, that you are His creation, says you were in His heart, you are His delight! If you do not know Him, please reach out to us. Give us a call at the number located on every page of this website or use our ‘Contact Us‘ page. We would be deeply honored, if you gave us the privilege of introducing you to the Lord. Neither money nor attendance at our church will EVER be mentioned.

If you have been spiritually fed by this ministry and WANT to give, we truly appreciate that and you may do so here, but all outreaches of this ministry are FREE for you and anyone to enjoy at no cost.

Until late-July, we are continuing to meet online.

If you would like to be included in these meetings you are VERY welcome, please just Contact Us and we will get you into our meetings.