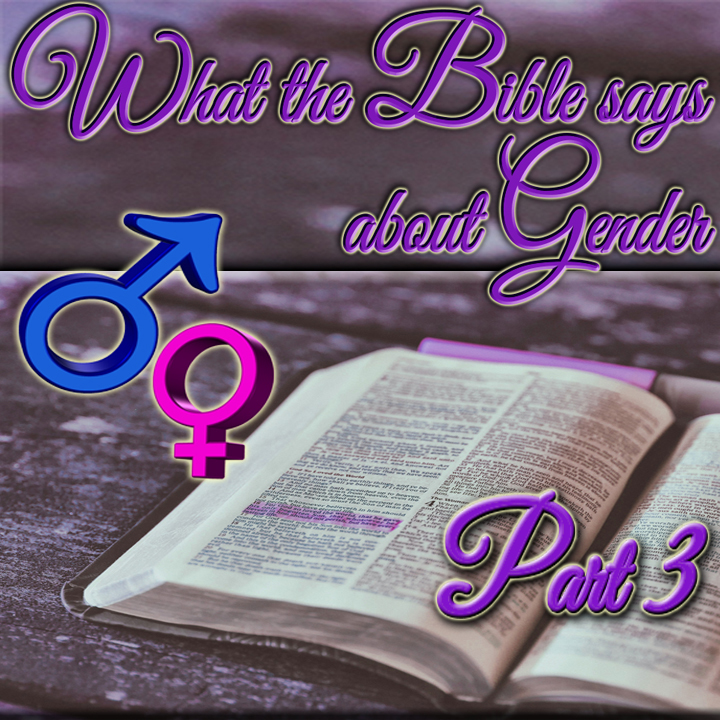 Series: What the Bible says about Gender

Message – What the Bible says about Gender Pt. 3

What the Bible says about Gender

We reviewed our handouts from last week and enjoyed a time of open discussion before proceeding in our messages. This link is to that segment of the service which I separated from the whole…Open Discussion Time.

Go over the Handout sheets

Now to the Old Testament, upon which all New Testament doctrines concerning the genders come.

There were no queens in Israel only Queen Mother’s. These were the birth mothers of the reigning king.

That the son, now had the charge of the kingdom, the estate and even his mother is made clear by King Asa removing Maacah as Queen Mother because she had used her position to influence idol worship. – 1 Kings 15:13 & 2 Chorn. 15:16

Inheritance was for sons – not daughters

We see this all the way through scripture. This was NOT bigotry but was the proper thing to do since men were to be the providers.

Widows and Orphans were ALWAYS provided for – widowers are NEVER mentioned.

Isa. 1:21-26, “(21) How the faithful city has become a harlot! It was full of justice; Righteousness lodged in it, But now murderers.  (22) Your silver has become dross, Your wine mixed with water. (23) Your princes are rebellious, And companions of thieves; Everyone loves bribes, And follows after rewards. They do not defend the fatherless, Nor does the cause of the widow come before them.  (24) Therefore the Lord says, The LORD of hosts, the Mighty One of Israel, “Ah, I will rid Myself of My adversaries, And take vengeance on My enemies. (25) I will turn My hand against you, And thoroughly purge away your dross, And take away all your alloy. (26)  I will restore your judges as at the first, And your counselors as at the beginning. Afterward you shall be called the city of righteousness, the faithful city.”

The extraordinary case of the daughters of Zelo-phe-had

Num 27:1-11, “(1) Then came the daughters of Zelophehad the son of Hepher, the son of Gilead, the son of Machir, the son of Manasseh, from the families of Manasseh the son of Joseph; and these were the names of his daughters: Mahlah, Noah, Hoglah, Milcah, and Tirzah.  (2) And they stood before Moses, before Eleazar the priest, and before the leaders and all the congregation, by the doorway of the tabernacle of meeting, saying: (3) “Our father died in the wilderness; but he was not in the company of those who gathered together against the LORD, in company with Korah, but he died in his own sin; and he had no sons.  (4) Why should the name of our father be removed from among his family because he had no son? Give us a possession among our father’s brothers.” (5) So Moses brought their case before the LORD. (6) And the LORD spoke to Moses, saying: (7) “The daughters of Zelophehad speak what is right; you shall surely give them a possession of inheritance among their father’s brothers, and cause the inheritance of their father to pass to them.  (8) And you shall speak to the children of Israel, saying: ‘If a man dies and has no son, then you shall cause his inheritance to pass to his daughter. (9) If he has no daughter, then you shall give his inheritance to his brothers. (10) If he has no brothers, then you shall give his inheritance to his father’s brothers. (11) And if his father has no brothers, then you shall give his inheritance to the relative closest to him in his family, and he shall possess it.’ ” And it shall be to the children of Israel a statute of judgment, just as the LORD commanded Moses.”

This service had content that is NOT written out here, so I would encourage you to listen to it WHILE you read…Blessings!