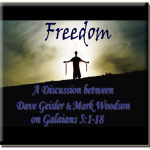 And He Healed them all: Freedom in Christ.mp3

This Sunday was a joint service between A Grace Place and Living Grace Fellowship where Pastors Dave Geisler & Mark Woodson discussed the freedoms we have in Christ and what that means using Galatians 5:1-18 as their key text.

Above is the audio only version and below is the video version.