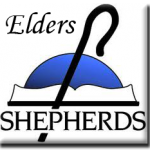 As I looked of the word Pastor I found that it was the Greek word ποιμήν poimēn and simply means shepherd.